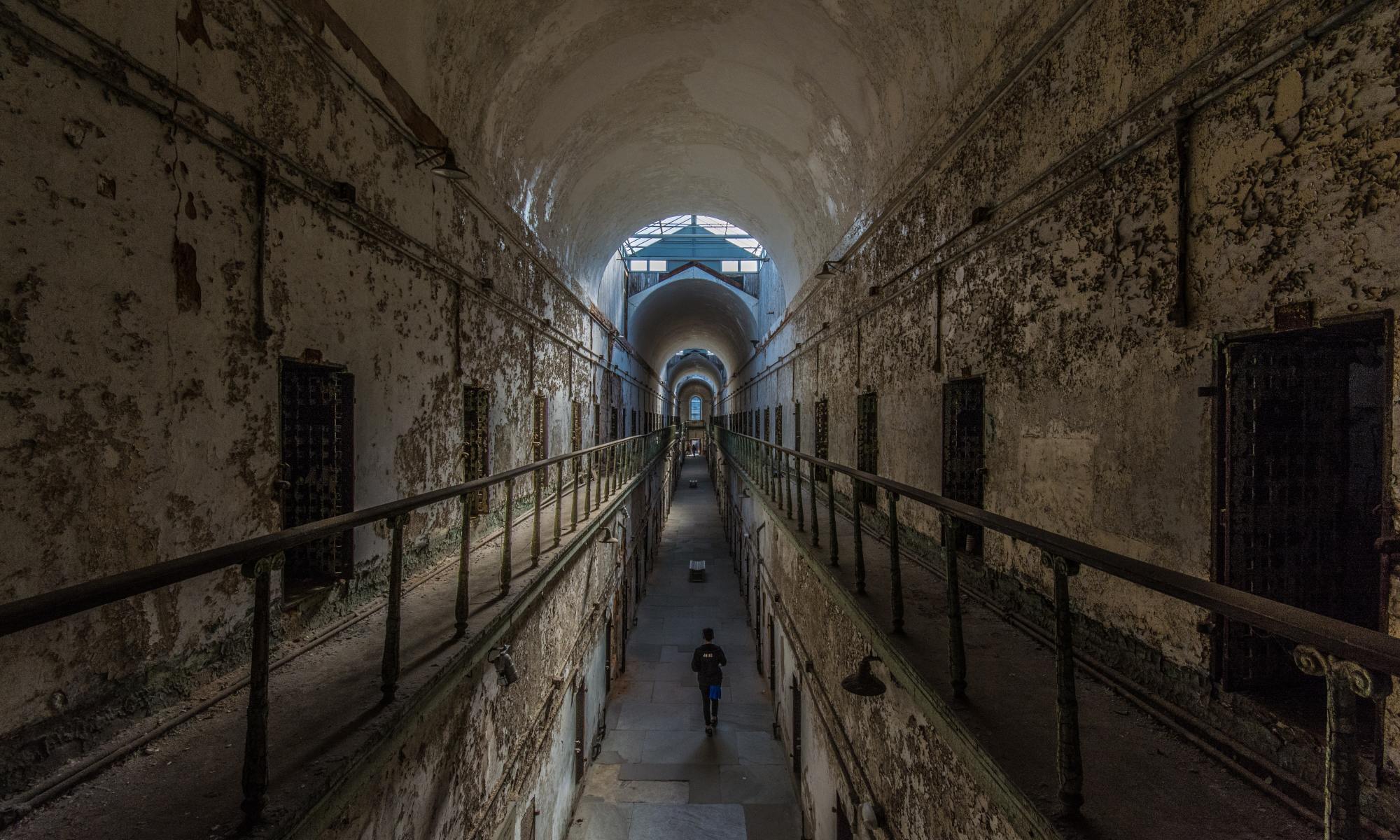 Looking to get a scare on a Friday night in Philadelphia? Have you ever visited the City of Brotherly Love and seen a sprite or heard a disembodied voice? If you haven’t there are plenty of sites around the city where you can do just that.

Philadelphia is one of the oldest cities in America. It was founded before the United States was even a county and still under British rule. So there are bound to be plenty of ghost stories around. Some so outlandish that they can’t even have an once of truth. While others are so believable you have to see it for yourself.

So come with us as we go around the city of Philadelphia in search for the most haunted places within the city. Will there be ghost in the night? We hope so. Otherwise what is the point of going on a haunted search if you come up empty handed?

Jails and Prisons across the county are known as hot spots for ghost sightings and unnatural happenings. Eastern State Penitentiary is no different. Just the outside looks like it’s haunted. Once you get inside it’s a whole different feeling.

From the run down hallways to the old looking bricks. It has everything you can think of when looking for someone ghost call home. Numerous prisoners died here over the years. Plus some very famous inmates called these cells home.

Just looking down some of the cell blocks makes the hair on the back of your neck stand up. Who knows what you might see when you take a picture. Will it be nothing? An orb? Maybe you will catch a glimpse of one of the currently inmates who never got his chance to leave.

Fort Mifflin down by the Philadelphia airport is the oldest Revolutionary War battlefield that is still around and one of the most haunted places in the United States. With the Fort being so old it just has the creep factor. Any of those old colonial areas have that feeling. You know the one I am talking about right?

Well at Fort Mifflin there are reports of a women who screams. She just screams. No one is sure who she is or why she does. But that’s what she does. There have been a few times passing Officers have stopped to investigate it. But each time they never find anyone. I think the women screams because she found her dead son after a battle. But than again who knows.

There have even been reports of Colonial Soldiers walking the grounds. I guess their fire watch never ended. They must be making sure the British don’t make it to General Washington.

Baleroy Mansion in the Chestnut Hill area of the city has one of the more evil ghost on the list. Good for you (depending on how you look at it) this is a private home and tours are NOT available. Not only is the mansion reportedly haunted by it’s many past owners.

There is one ghost who puts the rest of them to shame. Her name is Amelia and she likes to trick people into sitting in the death chair. According to George Meade Easby a former owner of the home anyone who sits in the chair dies a short time later.

A cousin of a former owner and a housekeeper both it is said sat in the chair. Both died a short time later.

Christ Church Burial Ground is only a few blocks from Independence Hall and has a very famous ghost who supposedly walks the grounds. Here you will find the grave of Ben Franklin. Now Franklin has reportedly been very busy over the year.

Back in 1976 he reportedly throw pennies at a nurse visiting the site. It is also claimed that he will punch the butt of ladies that are near by. Do you think he does it because they didn’t toss a penny on his grave? Did the nurse throw a Canadian penny on his grave? We just may never know.

Christ Church Burial Ground isn’t the only place supposed haunted by the sprite of Benjamin Franklin. Independence Hall is another one of his favorite locations. He has been seen many times over the years.

Usually a mist will occur when Franklin is around. So if you are walking around Center City in the dark of night and find yourself near Independence Hall look out for a mist. He may just be walking the grounds or inside the Declaration room.

The home of the Mayor Philadelphia from before and after the American Revolution is supposed haunted by Marquis de Lafayette a French Officer who commanded American Troops in the Revolutionary War. Who knows what kind of demons he has with all the death he would have seen.

Another famous figure from the Revolutionary War that haunts the Powel House is Benedict Arnold. His wife Peggy is also reported seen haunting this location in Philadelphia. Does anyone really know why they choose to not leave this place behind?

Yes that Betsy Ross the one who created the American Flag. Well her house on Arch street is supposedly haunted by some pretty scary ghost. There is one report of a worker at the house getting so scared they climbed out a window and onto the flagpole.

Betsy Ross also reportedly haunts her own house. However, she is not as scary and is said to been seen in the basement crying. Maybe she is crying because of how the other sprites are acting in her home.

Not only is it America’s oldest zoo. It is also a haunted location in the City of Brotherly Love. The zoo is believed to have been built on an ancient native American burial ground.

Some unexplained things have happened around the zoo. From lights going on and off. To doors opening and closing with no one else around. Zoo employees have also reported hearing footsteps and disembodied voices. Some have even claimed to see apparitions.

Located only a few blocks south of Independence Hall is the Physick House. For years a woman in a long gown has been see peering into the windows from the outside and in mirrors. No one is sure who she is or what she is looking for.

It doesn’t need to be dark outside for you to get a chance to see her. Just take a tour of the house and you may just spot something peeking at you through the mirror.

The USS Olympia is the last remaining steel warship still floating in the world. The USS Olympia carried the body of the World War I unknown soldier back from Europe after the war so he could be buried at Arlington National Cemetery. No like many warship around the world people have claimed to experienced all sorts of paranormal activity.

Everything from feeling cold spots. Someone or something touching you when no one is around. Hearing voices and seeing apparitions are also something that is common to those who believe in the supernatural.

Now this is an interesting place. Not only will you find a Statue of Washington overlooking the tomb of the unknown Revolutionary Soldier. The grounds are also claimed to be haunted by a ghost named Leah.

Leah is a Quaker woman who isn’t buried at Washington Square but protects all of the bodies that are buried there from bodysnatchers. It is claimed that many soldiers are buried at this site and Leah protects them from any would be thieves.

I have never walked through Washington Square at night but even in day light you get a creepy vibe. I can only imagine what it would feel like at night.

Sadly Tun Tavern burned down in 1781 and was never rebuilt. It is said that if you visit the location you will see Marines both young and old hanging out in the are on the 10th of November. Who really knows if they are all real people or if some famous Marines of the past are standing with them.

Good night Chesty, where ever you are!

Philadelphia is one of the oldest cities in America. The city has seen and done so much over those years so it’s no surprise that there are many haunted locations throughout the city. After all, Philly is where America was born.

Are you really surprised that some of the famous people from the past never left? From the ghost of Betsy Ross, Ben Franklin, Thomas Jefferson and many more famous colonial figures still wander around the city. Both day and night. You just need to know where to look.

There is also so many more locations we didn’t even list here. These are just some of the more well known ones. Each section of the city has there own stories and legends. Maybe one day those places will become just as famous.

Have you ever haunted for ghost in the City of Brotherly Love? Where you able to see or hear anything? Let us know in the comments below. We would love to see what you were able to capture. I am sure are other readers would love to know as well.

If you get a chance be sure to follow us on our social media accounts. We are a small page and slowly growing and every little bit helps. It will also help you stay up to date on when our next article hits.

8 Common Beginner Photography Mistakes and how to fix them

Should you visit Walt Disney World in 2021

200 Places to visit in the United States